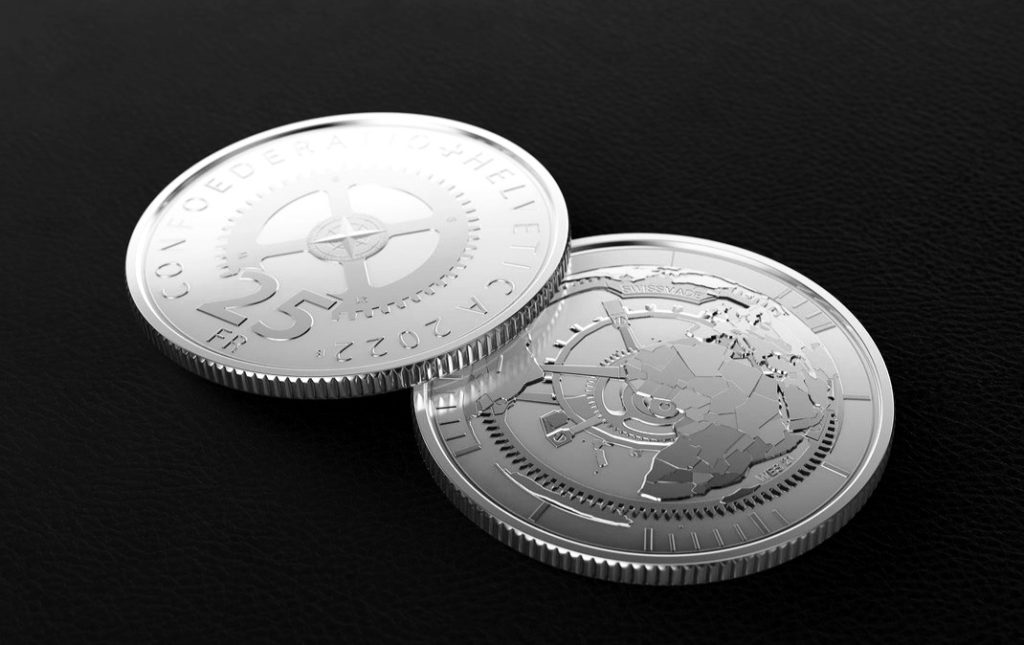 Today, the link between traditional watchmaking and collectable coins reaches a new, unprecedented level: Swissmint is launching “Timemachine”, a gold coin celebrating the Swiss watchmaking tradition. With a face value of 25 CHF, it is being produced in a limited quantity of 5000 pieces, at a cost of 419 CHF or 469 CHF with a certificate from the artist. More details can be found here.

With my Bienne bias, I’m very tempted to state that it only makes sense that Swissmint chose a Bienne artist to design the special coin. After all, Bienne is the world´s capital of watchmaking. But I think that shortcut would be unfair, on two accounts. First, the Bienne art scene is vibrant. Recognized for its free-thinking, alternative vibe, Bienne is a creative city way beyond, and independently from, watchmaking. Second, most importantly, Remo Lienhard, aka WES 21, is a fascinating artist worthy of being chosen for this project in his own right, regardless of where he’s from.

Born in Bienne in 1989, WES 21 also graduated from its School of Design. His singular style is in many ways consistent with what Bienne, Biel in German, the largest bilingual city in Switzerland, is all about: bringing different worlds together. Lienhard´s works offer a unique fusion of hard, industrial shapes with warm, almost burning tones. In his paintings, even when nature is robotized, our humanity is never far away. WES 21’s world is neither totally scary nor entirely reassuring. It invites us to question ourselves and look at everything around us with a curious, inquisitive mindset.

Beyond the growing success in his career as an artist, including a recent solo exhibition in Zurich, it totally makes sense that Swissmint selected Lienhard for this project. The precise, metallic angles in his productions are reminiscent of the world of watchmaking that surrounded his childhood. By contrast, the more mellow tones, the ever-present humanity, remind us of the deep history of watchmaking in Switzerland since the Huguenot refugees fled here in the 16th century, bringing with them their craftsmanship.

¨As an artist from Biel/Bienne, the Swiss city of watchmaking, I have always been fascinated by the technical precision of watchmaking and its artistic constructions¨ Lienhard says. ¨On the other hand, I am driven by an endless fascination for the very big questions such as the mystery of time.¨ The new gold coin combines both, a monumental time machine appearing at the core of our world, dictated by time. Whether this is a good thing or a bad thing is not the point. The fascination is around time itself.

As you can see in the video above, multiple masterful techniques were used to produce the 150 x 150 cm oil painting. It was then transformed by WES 21 himself in the miniature form of an incredibly detailed 20 mm coin, bearing his signature. One thing Lienhard highlighted when I reached out to him is how Switzerland is “pointed out with a special 3D effect and surface texture”. The overall level of detail of the coin is extremely impressive. “As you would expect from a Swiss watch”, the artist adds.

Although this project is quite literally about money, what it represents is much greater. It’s about celebrating Swiss watchmaking, of course. The use of gold, and other precious materials, are at the heart of our country´s watch industry. But beyond watchmaking, this project also celebrates the Bienne art scene and a unique artist who represents all of the above and built his own universe from it.

Photo and video credit: WES 21 / Remo Lienhard. For more information about the artist, you can visit his website.

Now that they’re all sold out in a day, will they sell on Chrono24 for 3 times retail? 😉

I wanted to get one but over 1h wait on the Swissmint website. Wow…