Bulova Accutron, the Other “Made in Bienne” Invention in Space 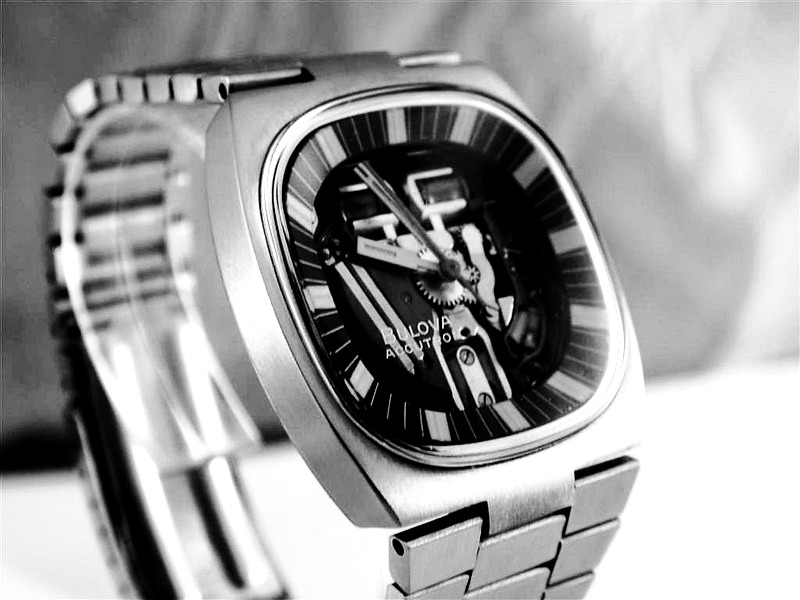 All watch aficionados know of the Accutron, a revolutionary movement introduced to the public by New York’s Bulova Watch Company in 1960. The charming hum of its tuning fork came with unprecedented precision for a commercially available wristwatch, with an accuracy of 2 seconds per day.

While the watch qualified by NASA to be worn by astronauts is famously the Omega Speedmaster, Accutron timekeeping technology equipped numerous US spacecrafts, starting in 1959, aboard the Explorer VI. In total, the electronic mechanism was used during 46 NASA space missions.

The Accutron came in different flavors. Most famously, the 1961 open-dial Spaceview (above) rapidly became an iconic timepiece, and a flagship of American watchmaking. President Lyndon Johnson even declared it a White House official ‘Gift of State’ in 1964. Another popular variant, the Astronaut GMT, with a more classic design, can be seen below.

It is a well known fact among watch hobbyists that the Omega Speedmaster is a pure product of Bienne watchmaking. However, that the Accutron is also a “made in Bienne” invention is certainly more under the radar.

Bulova was founded in 1875 in New York. The company opened its first manufacturing plant dedicated to the production of wristwatch components in 1912. While the headquarters remained in the United States, the factory was established on the other side of the Atlantic in Switzerland, more precisely in Bienne.

Max Hetzel, the inventor of the Accutron

The future brain behind the Accutron, Max Hetzel, was born in Basel, in 1921. He graduated from Zurich’s prestigious Eidgenössische Technische Hochschule and joined Bulova in Bienne in 1950 as an electrical engineer.

In 1952, Hetzel conducted research on existing electric watches, a novelty back then. He concluded they did not provide much added value in precision due to their low oscillation frequency. That is when he came up with the idea of using a tuning fork, ignited by a set of transistors.

Vibrating 360 times per second, the fork’s oscillations made the movement much less subject to disruption than any existing watch on the market, and ultimately much more precise. Registered in Bern in 1953 under patent number 312290, the Accutron was born.

The “made in Bienne” nature of this innovation is not just anecdotal. The city already was back then a central hub of the watch industry. Swatch and its eponymous group had not yet come into being, but Omega, Rolex and many other brands, as well as countless suppliers, were established in Bienne. It attracted investment and talent, at the cutting edge of micro-mechanics. The Accutron naturally came into being as part of this dynamic.

The movement’s success lasted about 10 years. As of 1972, production decreased. It had become clear that quartz movements, much more cost-effective to produce and less patent-locked than the Accutron, were the new norm in mass production of wristwatches.

Bulova’s future in Bienne was not so bright either. The company was at the heart of a major strike and eventually ended its activities in Europe towards the end of the 1970s, amid the broader “quartz crisis.” Its former production site, on Weissensteinstrasse, has since been converted to a residential building.

The former Bulova factory in Bienne, now converted into apartments

Acquired in 2008 by Japanese watchmaking giant Citizen, Bulova’s adventures continue far away from Bienne. But the brand and the city forever share a piece of their history. As a tribute to it, an early Accutron model can be found at the Nouveau Musée de Bienne.

The aim of this post is to highlight that the famous Accutron movement, while the product of a New York company, was “made in Bienne.” However, it only scratches the surface when it comes to explaining the history, and the physics, of this legendary movement. The resources below were used for this article and are recommended for those who want to go deeper on the topic:

My first Omega (Seamaster 60) was powered by a licensed Accutron. Great movement!

This just confirms that, at one point, I need to own a Spaceview…